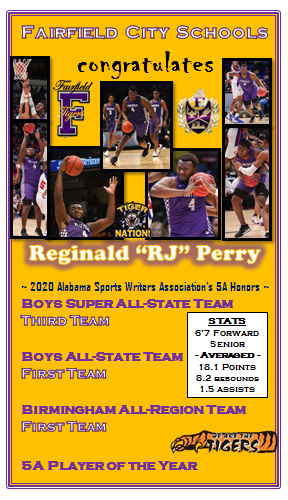 Our 6’7 Senior was named “5A Player of the Year” for the state of Alabama beating out some formidable opponents. After a tremendous season carrying his role as “the big man” and leading his team to earning their first ever  AHSAA Class 5A Boys Championship, one would not think it could get any better. That afternoon RJ was named to the All-Star team and given the highest honor of the championship game, MVP.

His leadership on and off the court should be commended. The concerted efforts of everyone on the team put Fairfield High on the map. We are the champions!

Reginald is a Senior and has signed to play football at Tennessee.

We wish him well in his future endeavors and thank him for his contribution to the Fairfield legacy.